Quotes from the Bard you can use every day — in four words or less !

Hamlet says this while dragging the corpse of Polonius out of her bedroom. The line is delivered hilariously by Laurence Olivier in the 1948 movie. 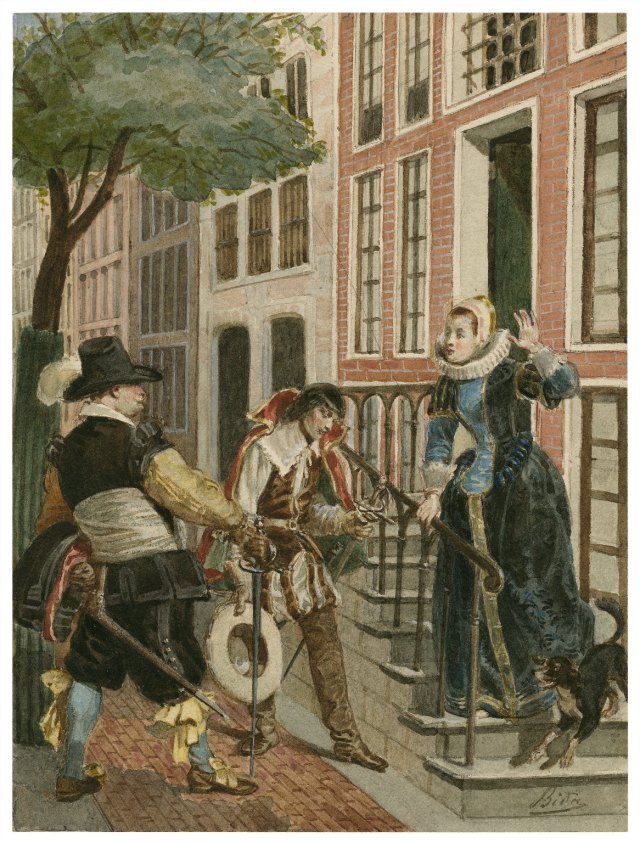 This is Olivia rebuking her drunken Uncle Toby (left) with a made-up name. Sneaksby and Idlesby were similar zingers from the Elizabethan era. “Rudesby, be gone” is suitable also for siblings who dare enter your room, hoverers around your cube, and so many others.

These four words are presented as a comment on the weather, as Macbeth chats with Lennox the next morning, but Macbeth is remembering too how he had a major fight with his wife in the wee hours. There was a lot of confusion, and bad things happened.

Anytime you trip yourself up, being too clever, you can invoke Shakespeare’s Richard — the ultimate weaver of tangled webs (the queen calls him a “bottled spider”). Richard’s most famous line is “My kingdom for a horse!” (V.iv.7).

Photo: Actor Richard Mansfield as Richard III (1889). He became a star in the stage version of Dr. Jekyll and Mr. Hyde. 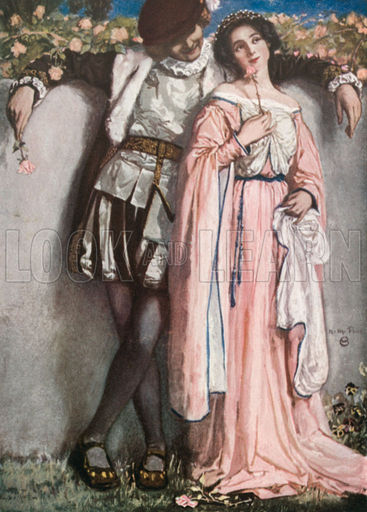 When Benedick asks a question that lovers have asked since time immemorial — How can I prove how much I love you? — Beatrice gives an unusually specific answer. Claudio is Benedick’s best friend.

When a messenger delivers bad news, Cleopatra grabs him by the hair and gives him a good shake.

Iago makes this snappy reply when Desdemona’s father calls him a villain.

Queen Margaret defies her enemies on the battlefield — with a line Shakespeare would probably edit if he were doing a remake today. In his time, “butt” could mean “target” or the brace that holds up a target, and the queen is telling the Yorkist forces arrayed against her: “Here I am. Fire away!”

Margaret of Anjou was a durable and versatile character for Shakespeare, appearing in four of his plays. She’s a hot-blooded princess-bride in Henry VI Part One, a scheming politician with a too-churchy husband in Part Two, and a warrior queen in Part Three. She makes a comeback in Richard III as the acid-spitting embodiment of “I told you so.” The only other character to appear in four plays by the Bard is Bardolph, a sidekick of the cowardly Falstaff.

Illustration: Joan of Arc serves here as a stand-in for Queen Margaret. This copyright-free engraving of Joan is from The Stratford Gallery or the Shakespeare Sisterhood by Henrietta Lee Palmer (1866). You can see a portrayal of Queen Margaret in a similar pose in the following article from The Guardian, which shows Dame Peggy Ashcroft dressed for battle. Scroll down at: http://www.theguardian.com/stage/2015/jun/09/great-performances-peggy-ashcroft-the-wars-of-the-roses

For those who choose to go out in a blaze of glory — being true to their own flawed selves — the brilliant but short-lived Hotspur provides a cheerful exit line.

— The Merry Wives of Windsor IV.v.2

Illustration: The Droeshout portrait appeared in the first publication of Shakespeare’s collected plays, known as the First Folio (1623).

What is the earliest joke you can remember from childhood? Maybe it was something on TV, possibly involving a small, seemingly powerless figure who turns the tables on somebody big. It might have been Tweety dodging Sylvester. Certainly Bugs Bunny had no trouble dealing with mini-adults like Elmer Fudd and Yosemite Sam. Faced with a gun at point-blank range, Bugs would plug the barrel with his gloved finger and . . .

Inspired by Bugs Bunny, below is a graphical model of how a joke works. Humiliation is the energy source in about a third of all jokes. References to sex are the combustible fuel for another third. The remaining third of jokes get their pop from disrupted language processing, which we’ll get to later.

According to some, “ha!” is an expression of relief like “whew,” meaning “I’m glad that happened to you and not me.” As you see in the chart below, a lot of comedy is associated with characters who bring misfortune on themselves. 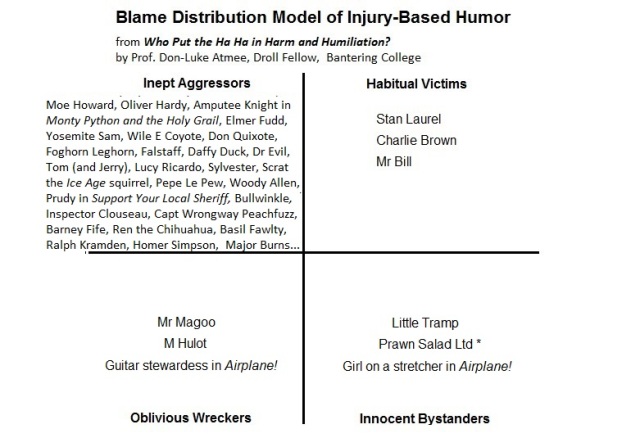 The Inept Aggressors are fools. They deserve ridicule — ha! Our feelings are less clear when we laugh at Habitual Victims and Innocent Bystanders. In the world of “insult added to injury” humor, as in the real world, the innocent take their whacks with the guilty. Too bad for you, chumps!

Thanks to advanced scanning technology, scientists are beginning to understand the role of the ass brain in joke processing and guffaw emissions.

Theodore Roosevelt (1910) via Library of Congress

I once organized a practical joke at work. It was just before a weekly department meeting, and there were about a dozen people around a big conference table, waiting for the boss to arrive. “Everybody, raise your chair to maximum height,” I said. The boss arrived soon after, started the meeting, and eventually he said the secret word (the name of a major client). Around the table, we all pulled the levers on our chairs and sank six inches in unison — a hilarious sight. Surprisingly, the boss — though he was famous for his sense of humor — didn’t laugh. For everyone in the room except him, part of the joke was seeing the look on his face. The thing about a practical joke is: there is always someone not “in on it.”

The schoolmaster has a switch in his hand and a quill behind his ear, circa 1905. Photo: Library of Congress LC-USZ62-37935

In seventh grade, Mrs W told a version of the “pi r square” joke, which uses “country” grammar and food ways to slam the rural poor — a popular target in all parts of the world and in every era of history. The funny thing is: Mrs W was a self-declared hick, having a Texas accent and being from a family that had seen hardship (which was why, she said, she wore a black skirt and plain white blouse to work every day).

But folks are paradoxical, and country people love telling jokes with a twang. It goes to show how stereotyping feels different when the target group is in on the joke.

Instead of a pickup, Mrs W drove a beat-up ol’ white Triumph TR-3.

Humiliation and sex account for about two-thirds of the joke universe. The remaining third belongs mostly to language-processing humor. Puns are an example. You think you know what a word means, and then it means something different (“What has four wheels and flies?”). Another type of “wrong meaning” joke follows the pattern of “Waiter, what is this fly doing in my soup?”

A third type uses the juxtaposition of poetic language with street talk. The high-low language combo usually gets referred to the appreciative chuckle center (see Jocularological Map of the Brain), but in this example from Silkwood (1983) you see how mismatched diction can bring on an epiphany. In one shattering instant of illumination, we see what life has been like for TDF. Fair warning: if you are offended by the foul language you hear on cable TV, you should watch this video anyway.  https://www.youtube.com/watch?v=LSoNSVKTvGw

One day in fifth grade, I noticed Mrs M kept pointing to the chalkboard with her middle finger. Clueless grownup! Little did she realize she was using a bad word in front of the class. I clamped my lips as hard as I could, but there was nothing I could do about the grand mal giggles in my chest. Terry B noticed and started making funny faces whenever Mrs M turned to the board. I couldn’t take a breath. My insides were jolting like an off-balance washing machine. I don’t know how I made it to recess. But the last thing in the world I wanted to hear was Mrs M calling on me to ask: “Karl, would you like to share with the class what is so funny?” 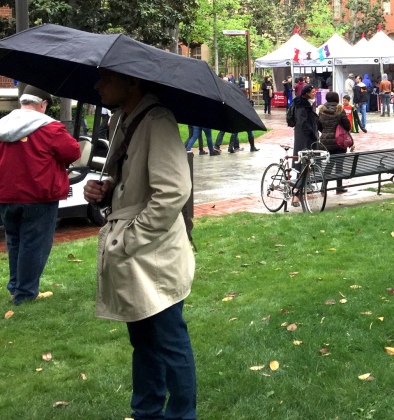 No face, no feet, an unloved life form.

Attack of the Cactoids. Desert garden at the Huntington Library, Pasadena.

A tree that lends a hand. NW corner of Kittridge and Wilbur, Reseda.

Secret Life of a Swimming Pool: The Mallard Brothers regularly stop by before 7 a.m., when the man in the safari hat arrives with a long-poled broom and skim basket. 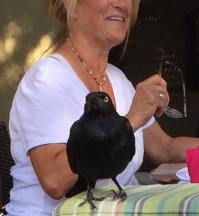 A study in staring forward with eyes on the sides of one’s head. Marmalade Cafe, Calabasas. 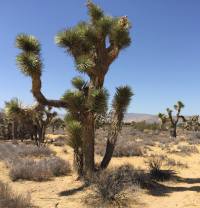 All Joshua trees point toward Los Angeles. The name Joshua tree comes from Mormon settlers, who were reminded of the prophet Joshua pointing the way to the Promised Land.