We love our cows more than they love us. Some say a cow doesn’t even love another cow so much as she loves being in a herd. This bony, barrel-waisted, thousand-pound bovine just won a beauty contest, but her handler is the one who smiles — at the sight of a cow who is all that a dairy queen should be. A Jersey cow typically has a ring of white around her nose. 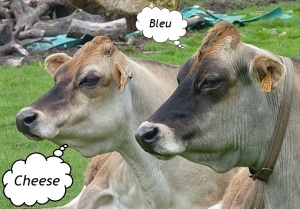 Cows are good at making milk, and humans have been very clever about making things from milk — butter, cheese, yogurt, ice cream, and the whipped cream supporting the cherry on top of the prettiest form of pretty please. Historically, cheese was important as a storable food. It could also be carried during travel. To make cheese, you need rennet — a curdling agent found in a cow’s stomach. To avoid killing a valuable cow, American pioneers took rennet from deer stomachs.

Cows don’t eat horses because their famously serial stomachs can convert grasses into complete nutrition. They particularly enjoy rye and oats (not so much wheat or corn).

Getting all your nutrition from plants is an awesome superpower, on par with the ability of plants to make their food from chlorophyll and sunshine. Alas, human digestive systems are unable to make nine of the 20 amino acids we need for protein. So we devour animals for THEIR protein. Or drink their milk. Lamentably, we are the Klingons.

The cows in this photo are Holsteins — your standard-issue, black-and-white American dairy cow. About 90 percent of US dairy cows are bred from Holsteins.

It’s better to be a cow than a steer, from a snipping point of view. Even so, dairying is a business that relies on four-tube milking machines, and that means a dairy cow must have four teats and no more. Any extras are sheared off when the calf is two to six weeks old. It’s unpleasant, but ethically justifiable. We humans do lots of mutilations on ourselves (circumcisions, piercings, scarring, foot binding, etc.) as well as animals, with a lot less reason. The US dairy industry has agreed to stop docking cows’ tails by 2020.

Big arteries and veins route a high volume of blood through the high-production udder of a modern dairy cow. Judges at the fair look for a smooth, snug transition between udder tissue and the belly (not “loose”). From the rear, they look for a high point of attachment and a strong medial suspensory ligament (MSL), which holds the udder up in the middle. A cow with cleavage has a pronounced MSL. 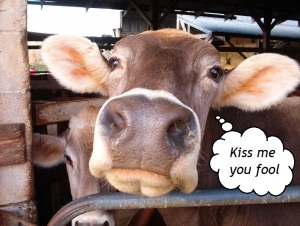 Judges evaluate a cow’s head for breed characteristics. It’s a low priority, being far from the udder, but we humans can’t help responding to a face. A cow’s face should be feminine, clean cut, and “slightly dished,” with wide open nostrils. Parrot jaw is bad, and so is a “wry face.” Nobody wants mockery from a cow. 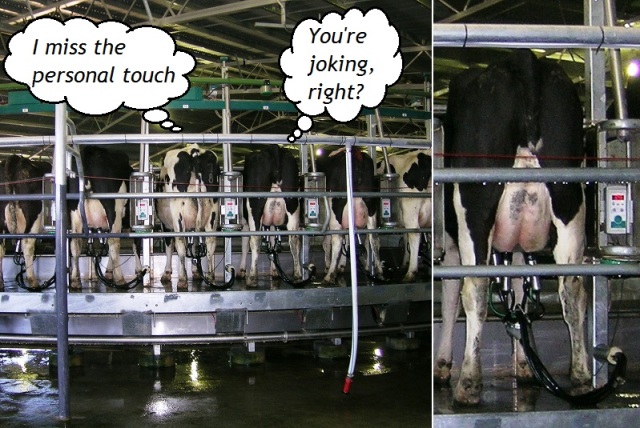 This 50-stall rotary milking carousel is fully automated. As a cow steps in, the system washes and dries the udder and scans the teats for mastitis. The vacuum nozzles attach, drain the milk, and retract without any assistance from a human — which may be fine with Elsie, given the massive indifference of cows to us as persons. A gate opens in front to send her on her way. Next!

Most dairy operations are too small to afford full automation. A dairy with only hundreds of cows to milk would still rely on humans to clean and inspect the udder and attach the nozzles.  http://jasonsmalley.photoshelter.com/image/I0000Nf8OOZyklpY

Here’s a wider view of a whole carousel: https://www.morningagclips.com/virtual-farm-tours-part-of-world-dairy-expo/ 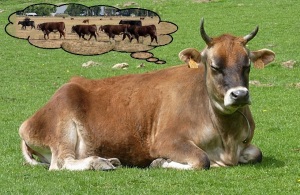 A heifer begins giving milk at age 2. In today’s high-production dairies, a robust cow might stay on the job to age 12, but most are culled by age 6 — because of mastitis, bad legs, or not enough milk. A dairy cow that retires at 12 has given her all and deserves retirement in a pasture, but MBA economics forbids it. Culled dairy cows, too tough to offer filets, are generally sold for ground beef.

Within living memory, dairy farming was a means of survival rather than industrial profit and loss. In this 1935 photo from Queensland, Australia, Annie Mallinson has two children with her in the milking shed — Florence Jean milking the other cow, and Arthur hiding behind a post. Note the skinny pins on the cows and the skinny legs on the humans. 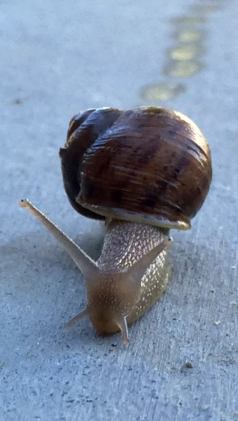 No face, no feet, an unloved life form.

Attack of the Cactoids. Desert garden at the Huntington Library, Pasadena. 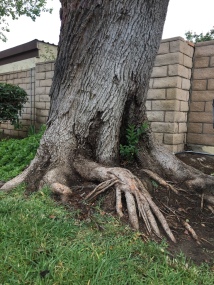 A tree that lends a hand. NW corner of Kittridge and Wilbur, Reseda.

Secret Life of a Swimming Pool: The Mallard Brothers regularly stop by before 7 a.m., when the man in the safari hat arrives with a long-poled broom and skim basket.

A study in staring forward with eyes on the sides of one’s head. Marmalade Cafe, Calabasas.

All Joshua trees point toward Los Angeles. The name Joshua tree comes from Mormon settlers, who were reminded of the prophet Joshua pointing the way to the Promised Land.